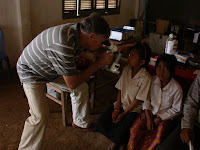 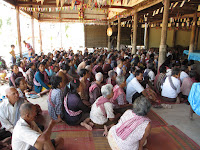 John Veale and Mike Webber (Optometrist Consultants, from Rose Charities New Zealand) went to Cambodia in mid-December, 2011. Their mission was to once again spend time at the Rose Charities Sight Centre in Phnom Penh with staff, training, ‘fine tuning’ and/or suggesting ways that could help in improving performance. The clinic now performs at a very high level of competence now in all areas of eyecare from surgery, medical ophthalmology and provision of spectacles after refraction, so the last six years of visits from the NZ team ( Dr. David Sabiston, John Veale and Mike Webber) , have proved very worthwhile.

Another aim of the work this visit was to attend and help at one of he outreach clinics undertaken by Rose clinic and staff. This is a strategy started this year to coordinate with a new Governmnent program for the rural poor. Seven NGO’s have signed up for the program, with Fred Hollows and Rose Charities being the first two groups to start outreach clinics and provide cataract operations to those to whom they never would have been previously available. The target is to perform 50,000 cataract operations by the year 2018 in Cambodia.

Rose Charities had planned for many years to commence rural clinics but in 2002 its vehicles and equipment were stolen by an crooked expatriate causing considerable delay to the program. Without this crime, The Rose Charities Sight Centre would by now have been able to assist many more poor Cambodians than the 100,000 it has assisted since 2002.

Mike Webber and John Veale attended the first Rose outreach clinic in the Kandal province and about an hour and a half drive from Phnom Penh. There was an official opening ceremony filmed by Tv news, and a high ranking Governmental official from the Ministry of Economic Affairs, before they we got down to business of screening.

They saw 253 patients, and of these about seventy were to be referred to the Rose Sight Centre for surgery for treatment at a later date. These patients were later transported down to Phnom Penh by truck (free), and taken home same way after treatment.

Dr. Hang Vra and his team conduct these outreach clinics once every two weeks at different locations in the provinces. The second outreach clinic saw 296 people and referred 125 referred to the Rose Charities Sight Centre for surgery.

Third outreach clinic saw 100cases`referred for surgery. The surgery in all these cases was predominantly for cataracts.

Dr Ventura has four such projects going in Cambodia. Her method it to target a village off the beaten track in Cambodia and takes in teams of various medical specialties, including ophthalmic, and to survey the health and needs of these isolated people. The program that John and Mike attended was in a village some one and a half hours drive from Kompong Thom, a town on the main road north to Siem Riep and geographically in the centre of Cambodia.

On this occasion The Singaporean team consisted of Dr Veronica Ventura, four Ophthlamic registrars in various stages of training, two optometry students, a lecturer in Optometry from the Singapore School, a group of medical students, and the Rose Charities NZ team (Mike and John). It was effectively a vision outreach program. The registering of patients, and various examinations were undertaken in classrooms in the village school. Over four days, 702 people were` seen for full health checks, and eye examinations. Of these about eighty required surgery ( 77 cataracts), and 220 pairs of ready made readers were supplied. A few required custom spectacles to be made up at Rose clinic in Phnom Penh. The surgery patients were to be
be transported free to the Rose clinic by Village Health, and receive their surgery free under the Government program a the Rose Sight Center. The Government program is generously sponsored by ABC Tissue.

Gratitude and Appreciation: John and Mike would like to acknowledge PIF (‘Pay It Forward) Foundation, NZ  for their financial support in purchasing a Keeler Hand Held slit lamp for Dr Vra, Belinda and
Kevin Way (OIC) for their gift to Rose clinic of two Neitz ophthalmoscopes, Dr. Geoff Duff for his donation of a Perkins hand held to tonometer,
Alison Hall for donating a supply of mydriatics and cycloplegics

Rose Charities would like to acknowledge the generosity and charity of ABC Tissue for their sponsorship through the Rose Sight Centre (and other NGO’s) to help eye care, blindness prevention and sight restoration for the poor of Cambodia 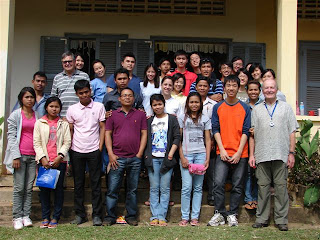 This entry was posted in Cambodia, General interest, People. Bookmark the permalink.