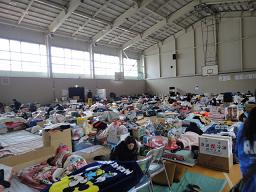 Iwate Prefecture (Kamaishi City and the town of Ohtsuchicho):
1) Ohtsuchicho
The medical infrastructure in the town of Ohtsuchicho was totally devastated due to the torrential tsunami. The clinics and hospitals in the coastal area were all washed away and their doctors and nurses were displaced as well. Hence, they are engaged in relief activities while they themselves are evacuated at the evacuation shelters.
The medical activities in Ohtsuchicho were headed by the staff of the local Ohtsuchi Hospital which also helped AMDA in procuring medical supplies. However, as the hospital had to undergo the suspension of their services until Apr. 15th (for the first time since the tsunami hit; allowing its employees to take some time off to take care of their personal matters), the evacuation shelters under its direction have been facing difficulties in their daily operations.
At Ohtsuchicho High School, due to the lack of coordination, things have been rather confounding as many relief organizations come and go in a short period of time. As of Mar. 24th, teams from AMDA as well as Osaka and Aomori’s medical associations have been active (all comprising a number of staff.) It is also reported that having a pharmacist in the team is very important in providing coherent services as most of the medicines are generic ones.
Majority of patients at Ohtsuchi High School are those with chronic diseases. Therefore, they all requested the medicines they regularly take.
One of AMDA doctors accompanied a local volunteer to deliver mobile clinic services to a remote community in mountainous area where assistance hadn’t reached. In the community where there were about fifty households (most of them elderly) the patients with chronic diseases had been left untreated. Among the patients were diabetes patients with abnormally high blood sugar level or those with excessive high blood pressure. In response to this, the team delivered mobile clinic services on a regular basis. 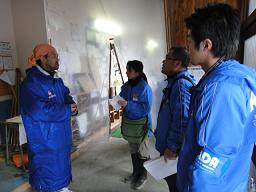 Contrary to Kamaishi city, the disaster headquarters in Ohtsuchicho has been very much isolated as lines of communication have not yet recovered. The road access to the headquarters is not easy either where the roads are covered by debris.
AMDA team members assume that it is going to take a lot of time to have the medical infrastructure recovered, thus the assistance from external relief organizations is a must. It is also foreseeable that services such as nursing for the elderly would be resumed in the course of recovery.
2) Kamaishi City
Medical volunteers are regularly allocated at the disaster headquarters in Kamaishi City. People are counting on AMDA as its doctors themselves are always present at the daily meeting. Large amount of medicine donated from all around the country has exceeded the capacity of the initial storage so that the stock management has been handful. 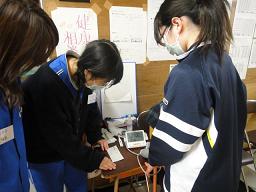 Miyagi Pref. (the town of Minamisanriku-cho):
1) Minamisanriku-cho
AMDA has been visiting several evacuation shelters in Minamisanriku-cho on a regular basis, conducting mobile clinic services and on-site needs assessments.
At one iron factory where about thirty people have been evacuated, AMDA prescribed Tamiflu to the evacuees as there were several suspected influenza cases.
According to the surveys conducted in collaboration with other medical teams, following facts were found:
1)There are lots of people who cannot come and collect medicines from the evacuation centers .
2)Depressive symptoms have been increasing among the evacuees.
3)Suspected influenza cases (Tamiflu was prescribed for its prevention.)
4)Along with mobile clinic services delivered by doctors, health care workers are also conducting home-visiting on their own. In order to avoid the overlap, the close communication/referral between the two parties is a must.
A pharmacist from AMDA team sorted out the medicines donated from its donor. The stock management of medicines is considered very important when aid supplies are coming in one after the other. 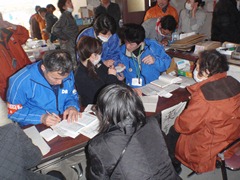 Shizukawa Elementary School:
Here, it is a local doctor who leads the medical relief, and there are about 50 to 80 patients to the temporary clinic daily. The prescription of medicine is for a maximum of seven days per patient; the doctors decided not to prescribe medicines for a long period if a patient can be cured within a few days. There are also several teams of psychiatrists dropping by in the area.
No gas, water or electricity in the shelter except for the nightly operation of a power generator that helps the evacuees to recharge their mobile phones. LED lights have been provided so the place is not totally darkened out. There are futons but no heating available. On Mar. 24th, the evacuees were able to take a shower for the first time after the disaster struck (40 people at a time every 30mins.) 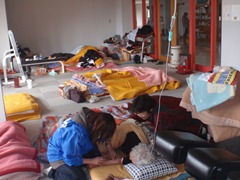 Shizukawa Junior High School:
Likewise, it is another local doctor that is in charge of the medical relief in the shelter. AMDA helped to deliver mobile clinic services to the vicinity and saw many patients with hey fever and high blood pressure. There were several severe cases such as inguinal hernia and hydrocephalia as well.

This entry was posted in Emergency relief. Bookmark the permalink.